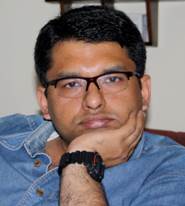 Sidin Vadukut is the author of the best-selling Dork trilogy which takes a satirical dig at corporate life, specifically the management consulting industry. The trilogy comprises of: DORK: The Incredible Adventures of Robin ‘Einstein’ Varghese, God Save The Dork and Who Let The Dork Out? The series has gone into several reprints and even after close to three years of release of the first book, the trilogy is still going strong – a testament to the author’s remarkable story-telling skills and his ability to keep a reading audience hooked to every word.
He writes the hugely popular column, Cubiclenama, a humorous take on corporate life and mainstream corporate culture and ambitions for Mint Lounge and is currently the managing editor of Livemint.com. He regularly contributes to various websites including Mint and ESPN CricInfo.
Booksoarus caught up with Sidin and chatted about what inspired the DORK series, what it takes to write a satire, the trend of giving up fulltime work to write and the impending release of his new book, The Sceptical Patriot in which he tries to unravel what it means to be Indian.

Sidin Vadukut: First read a lot. Read everything. Even before you commit a single world to paper, read and read and read. Rewire your brain so that it can process ideas it agrees with and disagrees with. And then when you sit down to write you will find it more pleasurable and more challenging.