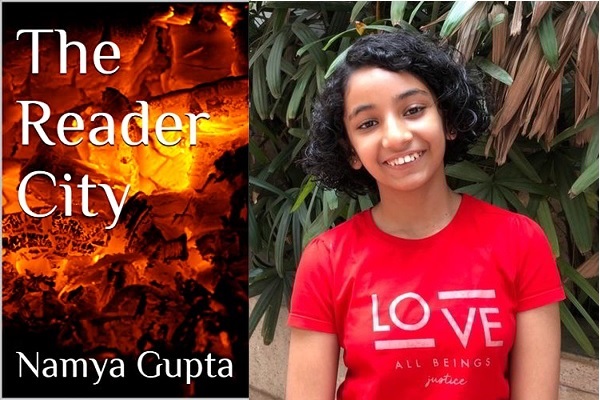 Meet Namya Gupta – a young, up-and-coming author, all of 11 years old. The first impression many would get is, this must be some sort of joke. But it’s only after you read her debut novella, The Reader City, that you begin to wonder – indeed?

Like many in her generation, Namya is a voracious reader of fantasy fiction. But unlike most of her peers, she has turned that interest on its head, creating a novella with a reimagined world, deep characters and some really innovative yet fun fantasy elements.

Despite the fantasy elements, the core of her work has human emotions and shows the promise this young talent has.

Booksoarus caught up with Namya to get some insights into her process, inspiration and her world.

Booksoarus: What was the inspiration behind The Reader City?

Namya: I read a lot of books and also have this hobby of looking at writing prompts. The genesis was one such prompt but then I turned it into something I thought I would love to write about.

I also create a fictional world with another species, taking inspiration from the Keeper of The Lost Cities (KOTLC) books. A species where everyone has something in common but a lot different too!

I am intrigued by the idea of a hero feeling betrayed and alone, forcing them to overcome their challenges even after they felt they couldn’t. I also like being with friends and perhaps that’s what prompted me to have the main characters to be a trio.

Finally, I wanted to show people that you shouldn’t judge a person by whom they are related to and that you should give a chance to everyone to say what they have to say.

Booksoarus: The book is in the fantasy fiction genre. Why this particular choice?

Namya: Ever since I have started reading since the age of about 3-4, I have found the genre to be the most interesting. I like to read about something that isn’t actually possible to happen in someone’s life.

Most of my favourite series involve fantasy and my mind simply could not lean in any other direction once I had perfected the idea of this novella.

I also think that new ideas which people haven’t ever thought about, invoke interest more than something that is common knowledge. The moment I hit about this fantasy idea theme, I knew it was something I could work on.

Booksoarus: How does it feel to write a book at such a young age?

Namya: It feels really good having ideas in my head, imaging a thousand things. I have always marvelled at authors for having so many interesting and fascinating things they write about.

Their descriptions, plot twists, and ideas in general make me feel that even I can write something so engrossing with time and effort.

I feel happy that I have been able to make up my own world and write whatever I want to happen in it. I have tried to write short stories from 3rd grade, but I never felt too satisfied by what I wrote.

But now, I am happy I finally wrote something that gives me satisfaction and which I hope is worth reading.

Booksoarus: Tell us about the process you followed for writing this book.

Namya: I had a lot of free time in my school in between classes, and I always used to forget taking a book to read along with me to entertain myself. That’s when this idea crystallized, and I started writing about it in my rough notebook.

After being halfway done, I showed it to my dad. He encouraged me to finish it so I could publish it. I wrote my entire book online post that, sent it to friends and family for advice and suggestions.

I read and re-read my book, made edits basis the feedback until I was sure I was ready to publish it.

Booksoarus: The book talks about a city and has some wonderful imagery of what is beneath. How did you imagine all that?

Namya: I remembered a movie I had watched about a few heroes, alone in a city destroyed by a bomb attack and I wanted to put that imagery into my book.

I also thought about mosaics as I had just learned how to draw them and felt they were beautiful but scary.

To me, the main lair of the villain was to be dark and gloomy but there had to be one source huge source of light. An inferno was the first thing that came to my mind.

My imagination for what was underneath the city came from my love for colours. It was interesting to imagine how a beautiful shining liquid, in a huge area, would look like and try to capture that in words.

Booksoarus: Are there some shades of Namya in Selena Hailturn your book’s protagonist?

Namya: As is likely, I feel I am a little bit like Selena. When I wrote the book, I thought about what I would do in the situation I had created for the main character. I also added elements of what my friends would do to bring variety and diversity.

I had not made Selena like myself on purpose but as I wrote on, I noticed there were similarities. Even though I am not sure how I would deal with the situations I created for her, what I wrote as her response was probably what I would do.

Making the main character like myself makes her more relatable so that writing descriptions and emotions are truer.

Namya: I am writing another book with a friend which is in its final stages, and we will publish it soon. I look forward to reading a lot more fantasy fiction, but also want to explore other genres like adventure, humour, crime and mystery.

All of them seem interesting even though for the moment, I like fantasy more. While reading gets me interested but when I write, I feel truly powerful and making the story exactly the way I want it a lot of fun.

I intend to keep writing, because when I write, I feel like I get to know myself better and give some sense to my ideas.

Namya’s book is now available on Amazon: The Reader City