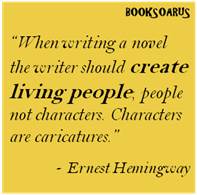 Here’s a complete A to Z account of characterization. We bring to you what goes into building and crafting memorable characters for your novel, short stories. Learn what “flesh them out,” actually means.
There is a writer behind every character
Whether the character is on-screen or is the one who comes alive in your mind as you process words, all characters are crafted by writers. Here’s a task: quickly name the first character that comes to your mind. The name can be from anywhere – books or movies or from a play. Can you visualize the person? So who was it?
Even as I write this I am thinking of vodka martini shaken, not stirred.
What makes a character memorable and stay on in our minds long after we’ve closed the last page of the book (or put the DVD back in its cover)? Characters are crafted down to their everyday quirk. Writers choose their appearance, clothing, their body-language, their attitudes, the accents etc (Read the A, B Cs below). And, richer the detailing, more memorable is the character.
Flat and Round Characters
Most books on writing craft will talk about flat characters and round characters. Jane Burroway in her book, “Writing Fiction” makes the distinction. She says, “A flat character is one who has only one distinctive characteristic, exists only to exhibit that characteristic, and is incapable of varying from that characteristic. A round character is many faceted and is capable of change.”
Flat characters would typically be your regular comic characters. You would expect Garfield, Dilbert or Calvin to behave in the same sarcastic-humorous, slapstick-humorous fashion witty-humorous fashion. And, that is a good thing. As a reader you know what to expect every time (not the punch line, the feeling) and honestly that’s why you are a fan.  The “this-is-what-you-get-always” is mainly because these characters find themselves (only) in similar situations – a comic quandary that gets them to display their funny side.
Round characters are main characters in stories (whatever the form: novel, short story etc). They change according to the situation and the plot.
The reason why I argue that round characters are normally main characters is because the ancillary characters such as the watchman or milkman or adulterous spouse display only one dimension of their character. As a writer you are not entirely expected to penetrate their inner worlds. Their deeds affect the main character and ‘rounds’ his/her personality.  Take the instance of Sholay (of course!). Gabbar Singh is a flat character. He displays only his evil side through and through. But, Jai, Veeru and Basanti display their many sides, transitioning from playful to serious to murderous as the plot unfolds.
How you can shape characters in your novel
It might make sense to brainstorm and sit with thoughts, paper and pen and make a list about your top characters. Take into account the A,B,Cs (as below) and jot down what comes to your mind. This also helps maintain continuity throughout the storyline. For instance, if you have described your character to have light brown eyes in the 1st Chapter, you cannot change it to some other color (unless s/he has a fetish for colored lenses) in the later chapters.
So, here are pointers to consider while crafting your characters. The more you know about your characters before you write, the more real they will appear in the final writing. If you were writing a biography about a person what would you do? You would firstly collect information. This is exactly what we are asking you to do for your fictional character. You need to know your character to some degree before you start writing.

How to develop characters in novels

Here’s the A to Z list of characterization tips

U: Universal
Writing craft books will tell you that a universal character is a sort of mould or an archetype into which your characters will fit in snugly. Confused? Okay, the hero, the villain, the outcast, the village idiot, the village headman, the troublemaker, the good cop, the bad cop, the prostitute with a heart of gold, the drunkard. Get it? Characters can get “slotted” into these archetypes and that makes them universal. So think about whether you want your character to get “slotted.”  I am not saying do/don’t make your characters universal. I am saying think about it when characterizing. People in real life cannot really be slotted; absolute categorizations of good and bad, this or that may not hold good. People are mostly grey.
V: Villain or The Antagonist
Don’t think of Mogambo. Think about the relationship with the character who opposes your character or is the creator of conflict. This can be personality-altering.
Or is your character entirely negative? Delve deeper. It is important to give your readers a sense of why he is negative. Readers need to be rooting for your main character. Think back-story and think of all the driving forces that motivates and propels negativity.
W: When?
The character’s relationship with time. When do things happen to him? At what age? At what points in time? How long does it a take for him to resolve conflicts? Timing is important
X: X-Factor
What is that special stand-out feature about your character that distinguishes him from the crowd? Is he The Chosen One to save the world?
Y: Your touch as the writer
Have you heard of, “within all of us there is a book?” It is often said that some characters are pseudo-autobiographical. As a writer you draw from your internal experiences and feed them into your characters. You might exaggerate or use creative license but you will think about your favorite grandmother and you might get your characters to have an oil bath every Sunday.  Recently I read Jerry Pinto’s “Em and The Big Hoom” (Hindu Literary Prize Winner, 2012) and I was floored by the way the author wrote about mental illness. The detailing, the imagery, the emotion – it was so beautifully written and later I read about how he drew from his own personal experience. Somebody very close to him was ill in a similar fashion.  A certain personal experience that is dear to you or that moved you will find its way into your writing and that is your own unique touch.
Z: Zealot
Until now, we’ve spoken about a character’s relationship to time, place, other people, his/her internal and external worlds. What about his relationship or personal feelings towards country, society and political affinities? Is he fanatical about any of these? A zealot is one who is fanatical about a proponent – a partisan – devoted to the cause usually socio-political. So, think about your character’s views about society, about immediate politics surrounding him. Will it affect his motivation enough to be an agent of change?
Note: Some of these are entirely my own personal opinions arrived upon after much introspection and much thought. Others stem from classroom discussions, discussion with like-minded people and from wholesome debates. The writing process is an experience in itself. It is as much about what you put on paper as it is about what you take once you finish writing.
Do you have another idea or word that might be more suitable an assignment for a particular alphabet? We’ll be happy to hear from you!